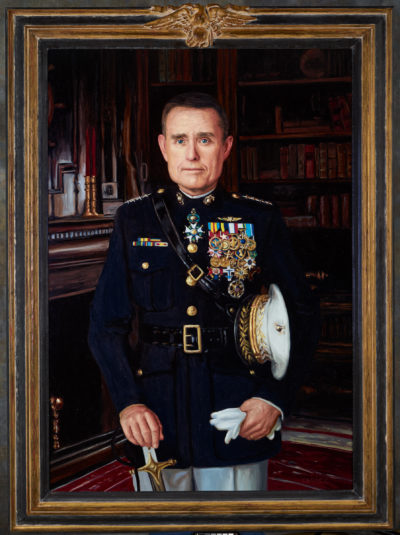 Credit line:
Gift of the family and classmates of Carl Mundy


From 2017: The Army and Navy Club, gift of the family and classmates of Carl Mundy.


General Mundy enlisted in the Marine Corps Reserve in 1953 while attending college. He served in the 38th Infantry Company, rising to the rank of Sergeant. He was commissioned a Second Lieutenant following graduation from Auburn University in 1957. His early assignments included service in the 2nd Marine Regiment, 2nd Marine Division and duty aboard the USS Tarawa (CV-40) and the USS Little Rock (CLG-4). He commanded a platoon on the 1958 Operation Blue Bat amphibious landing in Lebanon. He was an instructor at The Basic School and later served in Vietnam, where he was decorated for valor, as the Operations Officer, then Executive Officer, 3rd Battalion, 26th Marines, 3rd Marine Division, before serving as an intelligence officer in HQ, III Marine Amphibious Force. He commanded the 2nd Battalion, 4th Marines, 3rd Marine Division in Okinawa before service as a Plans Officer, Headquarters Marine Corps. After serving as G-2, 2nd Marine Division, he was Chief of Staff, 6th Marine Amphibious Brigade, then commanded the 2nd Marine Regiment, 2nd Marine Division and the 36th and 38th Marine Amphibious Units. As a flag officer, he commanded the Landing Force Training Command, U.S. Atlantic Fleet, 4th Amphibious Brigade, the Fleet Marine Force, Atlantic, the II Marine Expeditionary Force, and the Allied Command Atlantic Marine Striking Force. He was the 30th Commandant of the Marine Corps, retiring in 1995. He later served as President and CEO of the USO and was the Chairman of the Marine Corps University Foundation. A lifetime member of The Army and Navy Club, General Mundy is buried in Arlington National Cemetery.

Presidential portrait artist Mark Carder was commissioned to paint the Mundy Portrait in 2016. Carder is a highly regarded artist who also painted the earlier official portrait of General Mundy when he was the Marine Corps Commandant. That portrait hangs in the Commandant’s House in Washington, D.C.