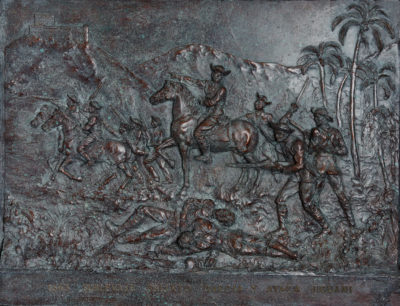 
General Calixto Garcia fought in all three wars of Cuban liberation from Spanish rule in the 19th Century: The Ten Years’ War (1868-1878), the Little War (1879-1880), and the Cuban War of Independence (1895-1898). The culmination of these wars, particularly the latter, resulted in the Spanish-American War, with United States forces deployed to Cuba, Puerto Rico, and the Philippine Islands against Spain. The bas relief depicts Garcia leading Cuban revolutionary soldiers fighting the Spanish army at Jiguani, Cuba in 1868, where he assumed the offensive, leading three regiments. He gained control of a major portion of Jiguani, but did not have sufficient forces to occupy the town. He led a retreat, carrying with him large quantities of captured supplies, and was pursued by the now-reinforced Spanish forces. Despite these odds, the Cuban revolutionaries managed to escape with only slight losses. Subsequently, Garcia was promoted from Colonel to General by General Gomez, the Commanding General of Cuban Army.