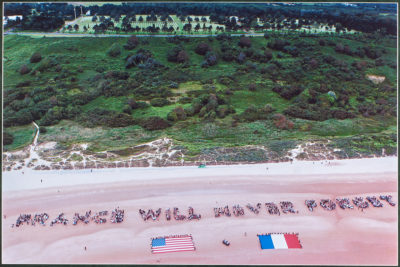 
An aerial view from June 30, 2007 of Omaha Beach at Colleville-sur-Mer, France, where 3,000 people form a message, “France Will Never Forget,” below the U.S. military cemetery. Omaha Beach was the scene of the bloodiest of the WWII D-Day landings that began on June 6, 1944. This event took place on the 63rd anniversary of D-Day.

This photograph was a gift from Club member Albert H. Small, a World War II Navy Veteran. Small established the Albert H. Small Normandy Institute, which sponsors selected student-teacher teams for intensive study programs about the D-Day Campaign, including travels to France and historic battlefield tours. The projects culminate with each team producing a biography of a soldier that gave his life during the Normandy invasion, to be deposited in the Archive of the Normandy American Cemetery.