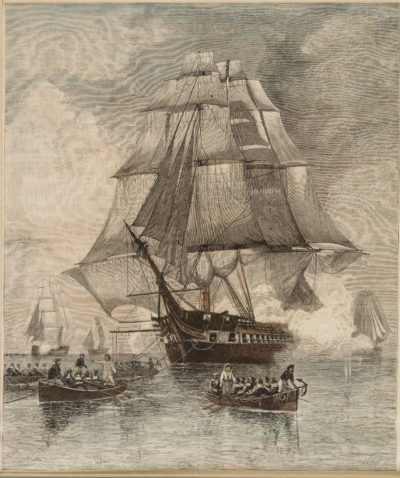 
From 1989:
The Army and Navy Club, gift of the Thomas C McGrath Collection


The 44-gun frigate Constitution became America’s most famous warship, but she would never have survived to achieve that distinction had she not escaped from seven Royal Navy ships in the War of 1812­—during three nearly windless summer days off the coast of New Jersey.

The U.S. declared war against Great Britain on June 18, and Captain Isaac Hull put Constitution to sea on July 12 to join a squadron under the command of Captain John Rodgers. Hull sighted five ships off Egg Harbor, New Jersey on July 17. He believed them to comprise Rodgers' squadron, but they were a British squadron out of Halifax. They had sighted Constitution and were giving chase.

The 57-hour chase in the July heat forced the crew of Constitution to employ myriad tactics to outrun the squadron, finally pumping overboard 2,300 gallons of drinking water. Cannon fire was exchanged several times, though the British attempts fell short or overshot their mark, including an attempted broadside.

The original painting is part of the USS Constitution Museum collection.