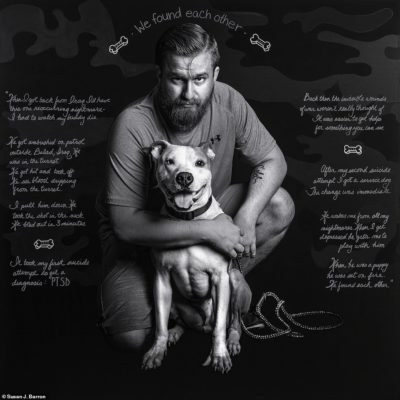 
Depicting the Invisible: Veterans Suffering from PTSD is a large-scale mixed media portrait series spotlighting veterans living with Post Traumatic Stress. A combination of photography, paint, and text, artist Susan J. Barron layers each veteran’s portrait with their stories in their own words, depicting the “invisible scars of war.” Barron’s intent is to create a dialogue and help build a stronger community around the difficult issues of PTSD, demonstrating to soldiers that they are not alone in their struggles. “The mission,” she says, “is to end their isolation and depict them as the heroes they are.”

In the portrait of Corporal Derek Butler, pictured with his service dog, Butler recounts the horrors of war. “When I got back from Iraq, I’d have this one recurring nightmare—I had to watch my buddy die.”

After his second suicide attempt, Butler was assigned a service dog, a pitbull named Jupiter, who had been severely burned in an act of animal abuse. Jupiter wakes Butler from his nightmares, distracts him, and keeps people at bay by circling him if Butler is out in a crowd and feeling anxious. “We found each other,” he likes to say. Butler and Jupiter were able to heal together.