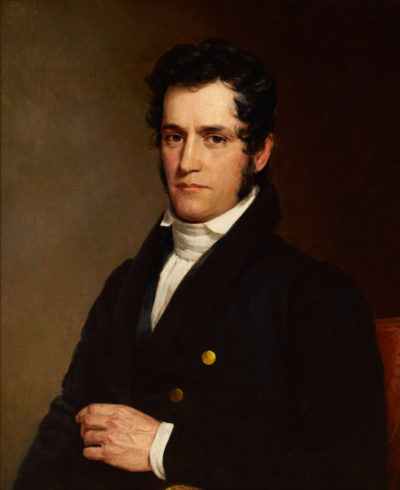 
From 2016: On loan from Benjamin and Marguerite C. Ogle


Commodore Perry, son of U.S. Navy Captain Christopher Raymond Perry, served in the West Indies in the 1790s and in the Mediterranean during the Barbary Wars. He was called the “Hero of Lake Erie” for his decisive leadership during the B­attle of Lake Erie, War of 1812. The fleet victory there was the war’s turning point in the west. He is known for his battle flag, inscribed “Don’t Give Up the Ship,” and for his message to General William Henry Harrison: “We have met the enemy, and they are ours…”

He participated in the defense of both Washington and then Baltimore during the British invasion of the Chesapeake Bay. Numerous ships bear his name. Several counties, towns, and cities are named for him in at least eight different states. The artist, John Wesley Jarvis, was a renowned early 19th century American painter.