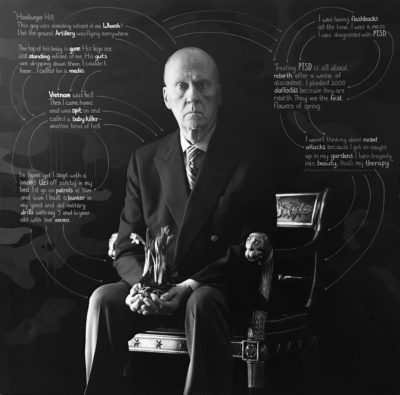 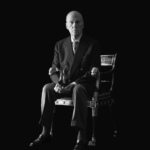 
Chuck Newhall, a decorated combat veteran, served with the 101st Airborne Division in the A Shau Valley, Vietnam. As a Lieutenant, he commanded platoon missions that included the August 1968 initial reconnaissance of what became known as Hamburger Hill. His combat decorations include the Silver Star, Bronze Star V (with Oak Leaf Cluster), and Purple Heart. He received an honors degree in English and ROTC commission at the University of Pennsylvania, and an MBA from the Harvard Business School. His memoir, Fearful Odds, A Memoir of Vietnam and Its Aftermath, explores his combat service and the lifelong effects of PTSD. He also wrote Brightside Gardens – A Dialogue Between The Head and The Heart, another project that has helped him to live productively with PTSD.

Newhall’s portrait is part of artist Susan J. Barron’s series, Depicting the Invisible: Veterans Suffering from PTSD, in which portraits of veterans are layered with their stories using their own words. The series was exhibited at The Club in 2019.