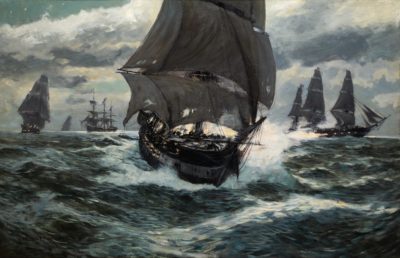 
The USS President was a wooden-hulled, three-masted heavy frigate of the U.S. Navy, nominally rated at 44 guns. She was named by George Washington and launched in 1800. She saw action in the War of 1812 under the command of Commodore Stephen Decatur. Attempting to escape the British blockade of Eastern ports in 1814, The President was severely damaged and captured by British warships. Decatur, the President, and all her crew became British prisoners.

The timing of this action was unfortunate. It occurred after the Treaty of Ghent had been signed in December 1814, which ended the war, but before the Treaty was ratified by the United States the following February. In the interim the war carried on. The Royal Navy released Decatur and his men, but took the ship into service as the HMS President. She was broken up for salvage in 1818.