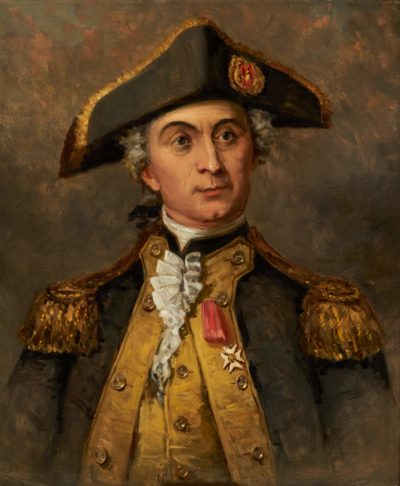 
Captain John Paul Jones is known today as the Father of the United States Navy due to his actions in British waters during the Revolutionary War. In 1787, he entered the service of Empress Catherine II in the Imperial Russian Navy, where he attained the rank of Rear Admiral. He died in Paris at the age of 45 and was buried nearby. His body was returned to the United States in 1906 aboard the USS Brooklyn as part of a Naval Task Force commanded by Rear Admiral Charles Sigsbee, a member of The Army and Navy Club. Jones’ coffin was installed in Bancroft Hall at the United States Naval Academy following a ceremony in Dahlgren Hall where President Theodore Roosevelt delivered a tribute to him. In 1913, his remains were re-interred at the Naval Academy Chapel at Annapolis, Maryland.