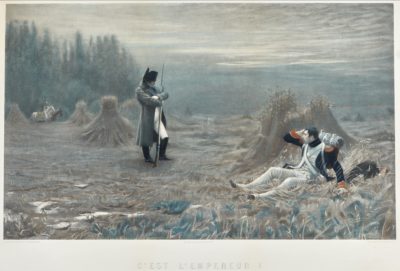 
The painting recalls an incident recorded in De Porquet's History of the First Napoleon. It depicts a French infantryman sentry, having fallen asleep on duty, awakening pre-dawn in a wheat-field during one of Napoleon's campaigns, only to find Napoleon himself mounting guard at his shamefully neglected post. Napoleon looks sternly at the drowsy sentry, with his arms folded across a bayonetted musket. Napoleon had ridden the circuit of his outposts during the night and, finding a sentry asleep, assumed duty at the neglected post himself. The emperor's mounted adjutant and horses may be seen in the background, as may the dwindling camp fires illuminated in the moonlight.

The original oil painting, 1890, was gifted to the University of Toronto by the artist in 1916.