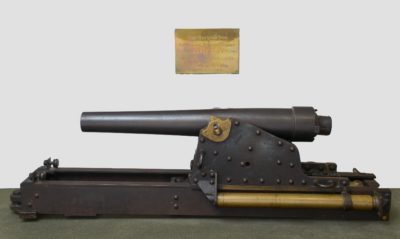 From 1890-1898:
Affixed to the Spanish armored cruiser Almirante Oquendo

From 1927:
The Army and Navy Club, gift of Claggett Wilson and Charlotte White


The Battle of Santiago de Cuba was a July 3, 1898 naval battle during which the U.S. Navy decisively defeated Spanish forces, sealing American victory in the Spanish–American War. It was an historic moment in U.S. Naval history and a watershed moment in American and Spanish history. The defeat of the Spanish Navy gave the United States uncontested control of the seas surrounding Cuba. These events ultimately led to the treaty of Paris in 1898, marking the end of the Spanish Empire and beginning the age of the United States as a world power.

This is a boat gun taken from the Spanish armored cruiser Almirante Oquendo by the USS Iowa after the Battle of Santiago de Cuba. It is marked “7c/m Arsenal de la Carraca 1890.”