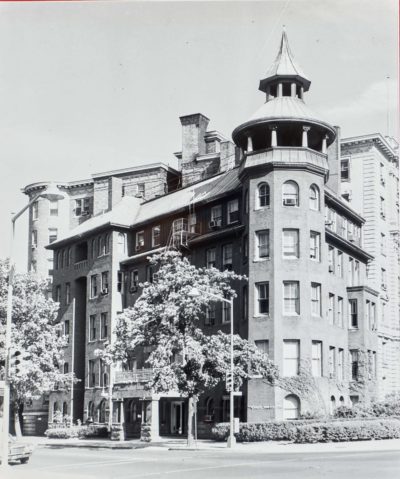 
The original clubhouse of The Army and Navy Club, located across I street from our present-day location, served as our headquarters from 1891-1912. The turn of the century was a period of booming development in the city of Washington, a necessary initiative to keep pace with a population that grew by a staggering 75% following the Civil War. In 1870, the District still had dirt roads and lacked basic sanitation, and some members of Congress even suggested moving the capital further west (President Grant promptly dismissed these proposals).

Alexander Robey Shepherd, appointed first governor of Washington by President Grant, initiated large-scale development projects that greatly modernized the city, though these efforts bankrupted the District government within a year.

The city of Washington faced financial and other limitations to development during the following two decades as federal and local governments struggled to determine strategies for its management. Finally, however, Washington was the first city in the nation to undergo urban renewal projects as part of the “City Beautiful Movement” in the early 1900s.

It is interesting to compare this photograph with other existing photographs of the 1912 clubhouse from about 50 years earlier. This photo depicts the Club after it had relocated to its current location, evidenced by its many visual harbingers of midcentury development: electric street lamps, stoplights, air conditioning units in the windows, fire escapes, and the grille of a 50s-era town car peeking into the bottom left of the frame. New construction flanks the rear and sides of the clubhouse in this photograph, compared to the relatively empty city block depicted in the earlier photo. At the time of this photograph, The Army and Navy Club had already moved into its new clubhouse.

Sadly, all these buildings have since been torn down, but these photographs present a unique opportunity to see firsthand the deep roots and long history of our Club within the city of Washington.