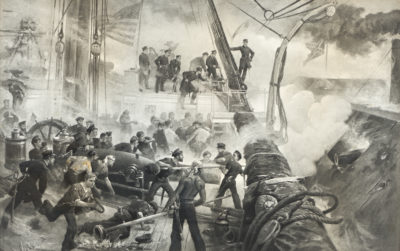 
The Battle of Mobile Bay on August 5, 1864 was a major blow to the Confederacy during the Civil War, where Union Admiral David Farragut led his flotilla through the Confederate defenses at Mobile, Alabama to seal one of the last major Southern ports.

This victory came at a critical moment for the Union. With General Grant stalled at Petersburg and General Sherman unable to capture Atlanta, the capture of Mobile Bay lifted the morale of the North and became the first in a series of victories that helped secure the reelection of President Lincoln later that year.

Admiral David Farragut’s force of 18 warships went against a Confederate squadron of only four ships. However, it included the CSS Tennessee, said to be the most powerful ironclad afloat. Farragut also had to contend with two powerful Confederate batteries inside forts Morgan and Gaines.

The original version of this iconic painting commemorating Farragut’s victory resides at the Wadsworth Athaneum Museum of Art in Hartford, Connecticut.