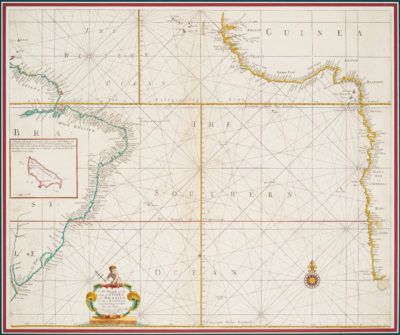 
This original, hand-drawn and colored map of the mid to South Atlantic by the renowned cartographer Samuel Thornton depicts the coasts of Africa and Brazil as known in 1711. Known in collectors’ circles as an "Admiralty Reference Chart", these original Admiralty charts were retained in Royal Navy vaults. They were the references from which lesser quality copies were made and carried to sea in the age of sail by captains of the Royal Navy. The few that left the vaults were usually gifted to retiring admirals. Colonel Titus was an avid collector of these maps and spent years searching for such a specimen. He obtained this one from The Map House in London. This chart was the prize of Colonel Titus’s collection. He donated it to the Club shortly before his death in 2015.