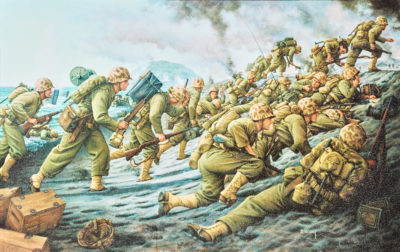 Credit line:
Gift of the National Museum of the Marine Corps


From ca. 2000: The Army and Navy Club, gift of the National Museum of the Marine Corps


This reproduction of Donna Neary's famous painting depicts elements of the 4th Marine Division landing on Yellow Beach I, approximately three miles northeast of Mount Suribachi. In terms of casualties, Iwo Jima was the costliest single battle in Marine Corps history. Capturing Iwo Jima was strategically vital to continue B-29 raids on mainland Japan, to provide emergency airfields for crippled planes returning from raids, and to reduce Kamikaze attacks on the American fleet. Although the campaign cost the U.S. more than 28,000 casualties (one third of the Marines involved), a similar number of American airmen later landed in crippled planes and were saved. The capture of Iwo Jima greatly hastened Japan’s surrender, saving civilian and military lives on both sides. Admiral Chester A. Nimitz said of the Americans who fought on Iwo Jima, "uncommon valor was a common virtue."

The painting depicts elements of the 4th Marine Division's eighth wave landing on Yellow Beach I into intensive artillery and small arms fire of the Japanese counter-attack. Mount Suribachi is seen in the background.

In order to depict the landing accurately, the artist researched official Marine Corps records and reports of the actual landing, read personal diaries, articles, and books written about the landing, and reviewed hundreds of photographs of the actual landings on Iwo Jima. The artist also utilized the combined knowledge of Marine Corps historians and specialized uniform and weapons experts. Actual black sand from the beach on Iwo Jima was mixed into the paint used to paint the black volcanic sand in this painting. The original painting resides in the collection of the National Museum of the Marine Corps.